(This route now connects with the Off-Broadway Bikeway and the Seaside Bike Route.)

The Seaside route through Kits Beach Park was declared a bike path by a City council motion in February when Vancouver enacted the bicycle helmet bylaw and wanted to include off-street City facilities. City staff couldn’t make a bylaw because it was Park Board jurisdiction so Park Board staff prepared a report with a map of their paths, and Commissioners passed it unanimously in June 1998.

The Park Board (PB) proposed a $2.2 million bike path 3.5 metres (12 feet) wide bifurcating Hadden Park (ignoring its covenant) and removing five acres of green space (counting the buffer zones). It also called for removal of 10 memorial benches and 23 of the 44 parking spaces in the McNicoll lot.

There was little public consultation except for an intercept survey, which was conducted after design drawings were underway. The proposal was revealed to PB commissioners only a few days before it was presented and approved at the PB meeting October 7. 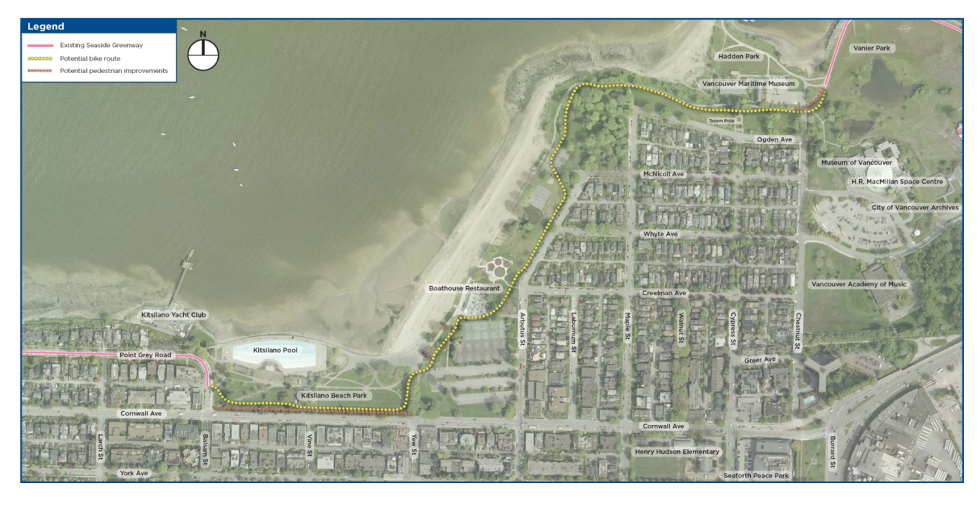 KPRA supported a coalition of park user groups to have the approval rescinded. Black plastic was laid down in Hadden and Kits Beach Parks to show the proposed path. A rally held October 20 at which 700-800 people turned out to oppose the proposal resulted in the PB sending out a revised RFP October 28. The November 4 PB meeting attracted more than 100 people and a motion to give more power to an advisory committee was defeated. Earlier that day, Megan Carvell-Davis filed a civil court action against the City of Vancouver and the Vancouver Park as paving this area for a bikeway was a breach of a Covenant of the Hadden Park Trust.

KPRA requested the RFP be suspended and the advisory committee include a complete engineering review of the real safety risks inherent in the current proposal that needed to be addressed. We indicated that Ogden Avenue meets all international safety standards for a designated bike route and is safer than the PB proposal. In the short term, we suggested adding signage at the end of the Vanier Park multi-use path directing cyclists to the existing bike path on Ogden.

Feb 17, The PB issued this statement

“The Park Board will continue to demonstrate a strong commitment to improving the safety and enjoyment for both cyclists and pedestrians. The Board directed staff to explore ways to improve safety on the existing route through Hadden and Kitsilano Beach Park.  Staff will also be relocating the funds from this project to other pedestrian and cycling safety priorities for the Park Board around the city.”

The PB presented its proposal for the Point Grey Road-Cornwall Avenue Corridor Project.

KPRA Actions: We supported the proposal with the exception that vehicle ingress from Cornwall onto Chestnut be retained, which was agreed. For easier vehicular egress from Kits Point, we requested elimination of the pedestrian crossing on the east side of the Cypress/Cornwall intersection and/or a right-hand turn lane signal or longer green at this intersection, especially May to September for visitors leaving after Bard on the Beach. Neither was granted.

In the meantime HUB assessed and documented the problems within the Kits Point portion of the Seaside Greenway: http://wiki.bikehub.ca/sites/committees/images/2/25/2016-08-02_HUB_Assessment_Ride_Report_2_Seaside_Greenway.pdf

The PB worked with a group of stakeholders on a revised Seaside Greenway plan that included HUB, from the KPRA Lynne Kent and Adam Smith, and other parties including the sports groups that use Kitsilano Beach Park. The stakeholders were in at least 80% agreement on solutions that were viewed as reconcilable with a little give-and-take by each side.

Jan 2, Lynne Kent sent the PB an email summarizing she and Adam Smith’s views. “From the neighbourhood perspective we agree that a safe cycle route between Vanier Park and Balsam St to close the gap in the seaside cycle route is important and we are committed to work towards achievement of such a route immediately.”  Principles important to KPRA were preservation of heavily used recreational areas of the parks for pedestrian activities, retention of exiting parking, no cycling on the pedestrian seawall between Chestnut and Balsam, creation of a one-way street on Arbutus north of Creelman for northbound traffic only to open an already paved space for a cycle lane on the west side of Arbutus.

March 6, Park Board staff, based on their deliberations with the group of stakeholders, tabled a conceptual alignment of a new separated cycling path through Kitsilano Beach Park requesting: (1) approval to collaborate with COV Engineering to prepare detailed designs, and (2) to report back to the Park Board when public engagement was complete. http://parkboardmeetings.vancouver.ca/2018/20180312/

After discussing the report from Staff but before hearing from any of the parties registered to speak, the Park Commissioners referred the report back to staff to provide more detailed information on the proposed concept.

May: The Park Board stencilled decal outlines of bicyles to indicate the two-way “path” through the southern parking lot at Kits Beach. After being criticized for not addressing the issue more holistically, the Park Board removed the decals and tweeted that it “would review the best approach for route markings.”

August: a KPRA team began meeting regularly to work on this key issue and several others.

Staff have yet to report back to the Commissioners or the public. In May, the COV implemented its Covid-19 Mobility + Public Life Response Plan. Kits Point was one of the first neighbourhoods to be designated as “Local Streets” to allow walking, running and rolling on roadways. Parking was temporarily removed adjacent to Kitsilano Beach Park on Arbutus, McNicoll and Maple and Point “Local Traffic Only” signage was positioned on entrance streets to Kits Point.

Because COVID-19 has imposed significant strain on the COV’s finances, in July City staff identified $300 million worth of projects in the capital plan that can be postponed or downsized in scope.

Within the Park Board’s budget, it was suggested $3 million (75% of the $4 million allotment) could be cut from Seaside Greenway improvements to Stanley Park and Kitsilano Beach Park.

May: KET suggested the use of Counterpoint, a free app that residents began using to count different modes of traffic and upload results to an open-source file.

The Park Board removed the most northerly 50 parking spots from the south parking lot at Kits Beach and added concrete barriers to create a divided bike route through the parking lot, a temporary fix to improve safety. Consultation on a more complete solution will resume this year.

August: A temporary bike was installed from the south parking lot on the parkside up Arbutus to McNicoll. Arbutus was made one-way north from Cornwall to Creelman. Community consultation began online.