COV staff has allocated $1.5 million over the next two years to study the feasibility of applying tolls to motorists entering the “Metro Core Area” (the entire downtown peninsula) and the Central Broadway corridor (bounded by 16th Avenue to the south, Burrard Street to the west and Clark Drive to the east). Staff has advised Council that, “The specific price and boundary for our Vancouver context would be determined in the first phase of work.” The intent is by 2022 to have a plan for the best technologies and strategies for mobility pricing in consultation and partnership with the region and province, present it to council in 2023 and, if it passes, implement it by 2025.

Being within the zone provides a calmer living environment—but living on the outside edge could become the worst environment as the closest communities to downtown become parking “black holes” for commuters avoiding tolls in the downtown and Central Broadway areas. Like the area just outside the centre of Syracuse, Sicily.

Kits Point is currently not included in the Metro Core Area. Should it be?

There is justification for including Kits Point and perhaps the entire Kitsilano neighbourhood in the Metro Core Area and, in a presentation made on 10/17/2017 by Gil Kelley, COV’s GM Planning, Urban Design and Sustainability, Kits Point was part of “CITY CORE 2050.”) Note that Alma and 16th Avenue in the far SW corner of Kitsilano is the same distance to Robson Square as is Clark and 16th in the far SE corner of Mount Pleasant, which is included in the Metro Core Area. 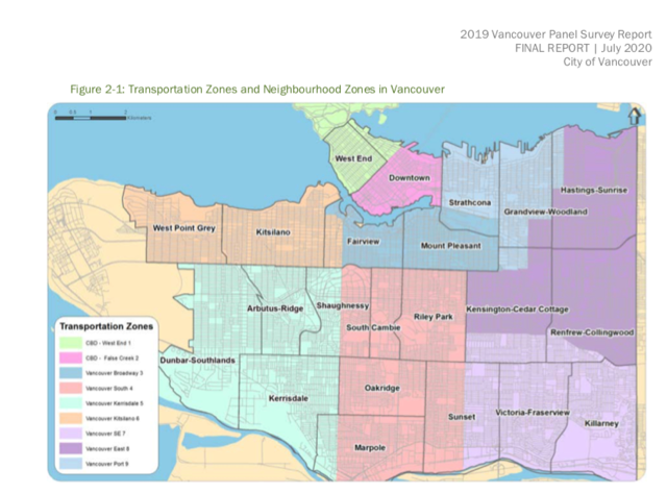 Furthermore, the Broadway Plan in support of the Skytrain extension to Broadway and Arbutus is still being developed. Using it as reference supports expanding the Metro Core Area along 16th to Vine and north to Cornwall.

What happens if you have to drive through the core for work? What about taxis, Ubers and delivery vehicles? What about tradespeople? What about families coming to parks in Kits Point? Does the congestion pricing apply only at certain hours? The COV says, “These are all scenarios that will be considered through the development of the strategy. Part of this work will include learning from other cities that use transport pricing, where people living in the metro core area are typically priced differently or have a lower fee applied. The specific price and boundary for our Vancouver context would be determined in the first phase of work.”

A concern that’s been voiced is: is this equitable and effective if it doesn’t apply to the entire Metro Vancouver region? According to its 2020 Transportation Discussion paper, Metro Vancouver intends to eliminate GHG emissions from transportation (but by 2050) with the goals of: i) “all travel within the region is made by active transportation or using zero-emission technologies powered by clean, renewable energy,” and ii) “all heavy-duty trucks, marine vessels and rail locomotives operating within the region use zero emission technologies powered by clean, renewable energy.” Notably, of the two “big ideas” identified in the 2020 Transportation Discussion paper, the first is to “reduce emissions through mobility pricing,” including the potential for an “ultra-low emission zone.”

Cities that have implemented tolls have learned that to avoid stifling economic activity or impeding people’s ability to move around, they must first address the core capacity of their transit systems.

Oslo has nineteen toll plazas situated three to eight kilometers from the city centre. The toll points are organized in three rings. At the outermost ring, you are only charged on your way into the city. At the two inner rings, you pay every time you pass a toll point. The regular price (June 2019 data) is 21 NOK ($3 Cdn) for passing one of the two outer rings, 28 NOK ($4 Cdn) during rush hour. The charge for the innermost ring is 17 NOK, 21 NOK during rush hour. Diesel cars and vehicles over 3,500 kg are charged more. Oslo also has garages at the rings so people can park and ride public transit to downtown. Is the COV considering the same? Where would it be in our area?

Graz, Austria, proved 30 years ago that retailers over-estimate the importance of the car. In reality, active-transportation visitors are of greater benefit to retailers because they spend more in aggregate, contribute to the vibrancy of the area and therefore attract other shoppers. Tourism is also stronger in cities that emphasize active transportation.

Pontevedra, Spain, after making its historic city centre car-free in 2008, has seen a 70% reduction in CO2 emissions, a drop in crime—and a 30% increase in business revenues.

What do you think? Share your thoughts on the KPRA website forum. Talk about the issues with your neighbours and if they haven’t registered on our website, please encourage them to do so. You could even write a post of your own and submit it to info@kpra.ca for consideration.